2 posts in a row?! Well, sort of! A few weeks ago, Rebecca Harwell, author of the pretty boss sounding THE THUNDERBIRD PROJECT (which releases TODAY!), got in touch with me to let me know how much she enjoyed my writing book, 2k to 10k, and asked if I would be interested in a guest post. Since I am always interested in hearing about how other people are using my tools, I thought it sounded like a great idea, so here we are!

2K to 10K, Rachel’s amazing book on writing efficiently, wasn't yet published when I wrote THE THUNDERBIRD PROJECT, but I wish it had been. There’s one simple trick Rachel talks about briefly (amid tons of other helpful advice) that would have saved me a painful revision.

Know your ending before you come up with your beginning.

It sounds contrary to the linear nature of storytelling, but it’s a gem. Here’s why. While the beginning hooks your readers, the ending is arguably the most important part of the story where all the threads come together in some sort of satisfying conclusion. In many ways, an ending is in the entire book in miniature as all the important characters, plotlines, and symbols are present. It also captures the tone of the entire story.

Tone is where knowing your ending first comes in handy. With THE THUNDERBIRD PROJECT, I did a rough, linear outline before I sat down to write the book. I started with a strong image of the beginning and a fuzzy ‘the good guys win somehow’ ending. The opening scene of my first draft had a lighthearted, almost humorous tone to it. It was told through the point-of-view of a rookie cop who didn't quite know how to handle the situation of an injured metahuman interrupting his morning patrol. I loved the scene; I still do. But it wasn't the right place to start the story, and I only realized that when I came to my ending.

The story began getting darker and darker as the stakes got real and the bad guys didn't pull any punches. While the good guys did end up winning somehow in the end, it was at an enormous cost. The second half of the story had a grim tone that didn't match the beginning.

Rachel note: OMG I can't say how many times this has happened to me!

I ended up having to go back and revise the beginning for tone. This was hard. Mainly, because tone isn't something simple that can be deleted or added. It permeates the plot, characters, and prose, and takes many drafts (in my case) to change. Eventually, I got the consistent tone I wanted. I added a new opening scene and revised the old one so while it still had some humor, it wasn't as lighthearted as the original version. No one who reads the opening chapters now will expect the rest of the story to be a feel-good romp.

If I had known how my story was going to end before I thought of a beginning, I would have been able to tell what kind of story I was writing (another piece of Rachel’s advice) and avoid a long and hard revision. By coming up with your ending beforehand, you know what to set the reader up to expect in the beginning so they don’t feel they signed onto a different adventure than the one you delivered. 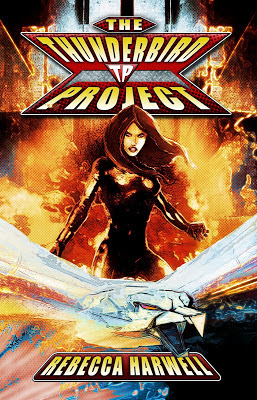 Not all superheroes live a glamorous life.

The Thunderbird project was an FBI-run group of superhumans until they were unceremoniously disbanded and sent out into the world to live normal lives. But unfortunately for the red-headed, mean-tempered Jupiter being 18-foot tall makes blending into society pretty much impossible. She resigns herself to living in warehouses and searching for a place where she can just be left alone.
Some just want the world to forget them.

Four years later, after being followed for days by unmarked vehicles, Jupiter is attacked and left for dead on a bridge, narrowly rescued amidst screams and camera flashes by an old teammate. She discovers that members of The Thunderbird Project are being targeted and one is already dead. Jupiter reluctantly joins the newly reinstated group.

But some people won’t forget and just want them dead.

With a whole lot of pain and past between them, the team struggles to find the identity of the assassins so they can all go back home. Since any chance of getting away from the world disappeared the day she crawled onto that bridge, Jupiter just wants to make the guys who came after her pay. And if that means sticking it to a world that hates her…so much the better.

You don’t get a ‘happily ever after’ when everyone considers you a freak.


About the Author
Rebecca Harwell grew up in small-town Minnesota and spent most of her time reading fantasy novels and comic books, obsessing over people who don’t actually exist, and writing novels for fun. Despite becoming an official adult last year, nothing much has changed. She is currently studying creative writing and Japanese at Knox College with an eye on getting her master’s degree in library science. Her debut novel THETHUNDERBIRD PROJECT, a dark superhero tale, is available from Bedlam Press, an imprint of Necro Publications. Visit her website at www.rebeccaharwell.com.

Thank you very much for stopping by, Rebecca, and congratulations on your release! Thanks everyone for reading, and I hope you enjoyed the guest post. Hooray for new authors doing new and cool things!

Email ThisBlogThis!Share to TwitterShare to FacebookShare to Pinterest
Labels: Interviews

all brains no balls

for the lying “mental cases” @ FTB

I'm currently dealing with this, but on a slightly different scale.

I've a planned series, and book 2 was so much darker than book 1, and the plans for book 3 are even darker. They don't match. Book 1 is a romance and a loyal horse, while book 3 is about zombies. It does tie in, but the tones of the books are so different, I've have to go back and edit a lot of the storyline. I haven't started the edit of book 2, but it's also going to be massive. Hopeing that it won't take 5 edits of book 2 to realise though (like it has for book 1)!