As you've probably surmised from the pictures, we're on vacation this week. Fortunately, this works out in your favor because we've got the amazing (and Hugo award winning!) essayist, author, feminist, and all around whipsmart lady Kameron Hurly here on the blog to talk about making the jump from trad to self-pub and back again!

I've read many of the essays from Geek Feminist Revolution and I love them. She has a ton of essays featuring deep, critical thought on geeky topics up for free all over the internet. It's a type of deep introspection genre that's very hard to find in genre fiction especially, and as a member of the SFF community, I absolutely love what she does with and for my genre. I'd be super stoked to get her on the blog for any reason, but she is especially perfect for today's topic, and let me just say, we are ALL in for a treat.

So, without further ado, here's Kameron to talk about the business of taking an indie project to NY!

How to Repackage a Self-Pub Project for Traditional Publication


Hello, everyone! And thanks to Rachel for hosting me. Today I’m going to talk about my recently-released essay collection, The Geek Feminist Revolution, and how my agent and I worked to repackage and pitch content which had already appeared around the web into a traditional publishing deal. 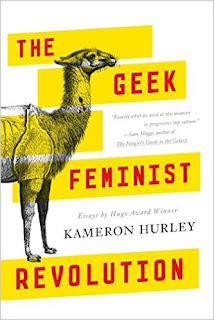 As a general rule, unless a self-publishing project sells a lot of copies, it’s difficult to get traditional publishers interested in them. I know! It sucks, but you’ll hear this a lot from agents and publishers. It really has to be a legit phenomenon to stir up interest, especially now that there are so many more self-pub success stories. Even essay collections like the one I pitched can be a difficult sell if more than 20% of the content you propose for the collection has been previously published online.
So how did we do it?


After my essay “We Have Always Fought” was nominated for a Hugo Award in 2014, I put it up for sale myself online along with some of my “greatest hits” from my blog under the title “We Have Always Fought.” I did this with an eye toward using the collection as a promotional piece for my upcoming traditionally published book, The Mirror Empire. It sold a few hundred copies across several platforms and paid some utility bills. But when I went to put together a second essay collection in April of 2015, my agent approached me with the idea of taking content from the first collection and second collection and combining them into one collection that we could pitch to traditional publishers.

Yes, this one was all my agent’s idea, if you can believe it. Sometimes it’s good to have someone else invested in your business who can bring great ideas to the table!

Pitching a non-fiction collection is a little different from a fiction collection, but some of the same principles apply to both. I knew that the collection needed a topical frame. That is, I needed to make it clear why and how it was relevant to audiences. What was the hook? What connected all of this content? Why should a publisher invest money in it?

I needed a powerful concept and a powerful title. The essays covered a broad number of topics, from reviews on geek media to feminist rants about publishing to writing advice on the importance of persistence, craft, and promotion. How do you unify those things? I took a look at the media and the stories that were being written about geek culture. The backlash against women creators, online harassment, and the increasing visibility of women in the genre were hot topics. So I gave my collection a hot title: The Geek Feminist Revolution. What could be more timely than that?

We also knew that we needed some original content for this collection, so I wrote some titles and a paragraph each of what the 7-10 original essays would be (I ended up writing 9). Though my agent cautioned me this would be a hard sell with mostly reprinted content, I stuck to my guns on this one. I had other publishing contracts I had to fulfill, and just didn’t have the time to write a lot of new content. So I wrote a strong introduction to go with our pitch, and my agent submitted the pitch package to 45 editors. Yes, 45.

As a reminder that rejection is rife at every level in this business, out of those 45 publishers, we got 43 rejections and two offers. Luckily you only need one offer! We chose to go with Tor Books, which had experience publishing other essay collections from folks like John Scalzi and Jo Walton, and included ideas on how to get the book to the academic market – a big market for this book that would have been impossible for us to tap as a self-pub title. We sold audio rights separately to Highbridge Audio.

As unifying the collection of disparate essays was top of mind, I added an epilogue for the collection and split the essays up into four sections: Level Up (about writing craft), Geek (about geek media), Let’s Get Personal (personal essays unrelated to geekery), and Revolution (essays about social activism). Organizing the collection in this way helped pull everything together.

So far the collection has generated a lot of excitement. Organizing it the way we did – with a title tied into discussions happening within pop culture today - also made it easier to pitch to media outlets. We’ve gotten coverage from TheGuardian, Wired, Bitch Magazine, the Barnes andNoble SFF blog, The Huffington Post, Boingboing, and others, which is great. We had reviews from Publisher’s Weekly, Kirkus, and I’ve heard that NPR may be running a review soon as well. My local Ohio newspaper and my hometown paper back on the west coast are also running stories (pro tip: local newspapers always love “local does good” stories – pitch them!).

By far this is the most publicity any book of mine has picked up, and that’s tied to the cultural relevance of the book and how it was pitched as well as the fact that by going with a trad publisher, I have a publicist who has been pitching the book to places like crazy. It’s incredibly nice to have the help!

So this is all great advice for nonfiction collections for those who want to repurpose blog content. But what about fiction?

There are many ways to repurpose your fiction. For short fiction, I started a Patreon which funds the creation of about a short story a month. I then sell it as a reprint to traditional magazines. At some point, I will then put all those stories into a collection and seek out a traditional publisher for that (I’ve already had several ask for it – we’re waiting until we have a really strong book of stories).

It’s also possible to repackage novellas in this way. If you’ve written and self-pubbed a novella series that has a strong following, take two of those novellas, write two original ones, and package them as a single book that you can then pitch to traditional publishers. Yes, this is going to be easier to do once you already have a track record with traditional publishers, but it’s something to consider later on down the road. Always keep your options open, and think of ways that you can maximize how much you’re making from existing work.

Also, though it probably goes without saying, I’m going to say it anyway: when negotiating with a traditional publisher, always try and keep as many rights as possible. There are still smaller presses that will do print-only rights deals. If they want foreign rights, try and get reversion clauses so if they don’t sell those rights within X number of years, they revert back to you. Keep your comic book and special edition rights, because those too can either be resold or can become projects that you do yourself. And never, ever, ever should you be selling movie rights to a publisher. Never, ever.

I hope this was helpful for those of you looking for ways to remix and repackage your work. When I was a baby writer all I wanted was a book on a bookstore shelf, no matter what. I have since learned so much more about the business and what really matters. At the end of the day, you must be a smart business person who pairs with a publisher only when/if they can offer you something that’s valuable to you, something you can’t do on your own. And at every point in the process, your publisher, your agent, should feel like a business partner, not a bully. While publishers are also trying to run a business, you have to meet them at the negotiation table as an equal, and fight for what is important to you. Sometimes, it’s true, that will mean walking away if they can’t offer you what you want. And that’s perfectly OK.

So what projects do you have that you can remix and repackage? Does your own author career plan include a blend of traditional and self-published work? What, you don’t have an author career plan?? Ah, well, that can be the subject of another post!

Good luck out there, folks, and happy writing.

Super huge thanks to Kameron for keeping the blog awesome for me while I'm on vacation. If you liked this post, I highly encourage you to check out her other essays, and if you like those, she also has a Paetron account where you can support her work (and get cool exclusive stuff!) for less than the price of a cup of coffee.

Trav and I will be back next week with business and craft posts as usual. We should also have more fun Heartstriker stuff for you, so be sure to check back! If you're not already, you can follow me on social media (Twitter/Facebook/Tumblr/Google+) to never miss a post.

Until next week, I remain your friendly neighborhood Spiderman author,
Rachel
Posted by Rachel Aaron at 10:00 AM

This is one supplementary wonderful webpage that has uncovered me breathtaking income which include tutorial and materials to the major group of artificial surgical procedure and every one.