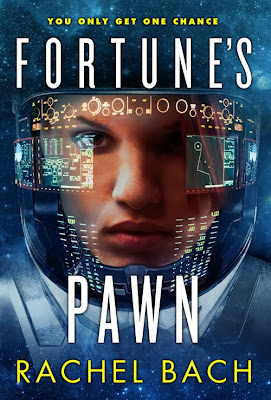 That is, until she just gets a job on a tiny trade ship with a nasty reputation for surprises. The Glorious Fool isn't misnamed: it likes to get into trouble, so much so that one year of security work under its captain is equal to five years everywhere else. With odds like that, Devi knows she's found the perfect way to get the jump on the next part of her Plan. But the Fool doesn't give up its secrets without a fight, and one year on this ship might be more than even Devi can handle

With a little over 2 weeks until the offiical launch of my new SF series, it's time to give away some SIGNED BOOKS! So, I'm giving away seven signed copies, one for each day until Monday, October 21, plus a grand prize of a $50 Amazon.com gift card at the end! And, because the Goodreads book giveaway is only open within the US (and because the FP paperbacks are waaaaay smaller and lighter than the Eli ones), this giveaway is open WORLD WIDE! 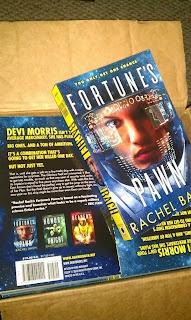 Now, if you've ever seen a contest on my site before, you know the drill (different name, same rules), but here they are again because copy+paste is my super power.

To enter to win these amazing prizes, all you have to do is spread the word that FORTUNE'S PAWN is coming out on November 5th! Post about it on Facebook, Twitter, Pinterest, Tumblr, your blog, or any other social platform of your choice. Drop me a note in the comments below letting me know what you did and I'll enter you into the pot.

This is a raffle, that means you can enter multiple times. Every time you spread the word somewhere on the internet, put it in the comments below with a link. Pin the cover, post on Twitter, and mention the book on your blog? That's 3 entries! Tell me so and I'll enter your name 3 times. Telling people about this contest also counts as an entry, to be sure to spread the word!

I'll be drawing from the comments on this post every day, including today, so the sooner you enter, the more chances you have to win! You can also keep promoting the book every day to increase your chances ever further. Winners will be announced the morning of the day after they win, so today's winner will be announced tomorrow morning, etc.

The grand prize drawing will be one week from today on Monday, October 21 at 5:00 PM, east coast US time (EST). After that entries will be closed and I'll be mailing out a lot of books!

Boring Rules Stuff
As I mentioned earlier, this raffle is open WORLD WIDE! Only one entry per social network per day (so no posting it a million times on Twitter for a million entries :P). Readers who win one of the earlier signed copies are still eligible for the grand prize gift card at the end, but since they already have a book coming to them, I'll pick a new winner to get the extra copy.

If you have any questions about the contest, the rules, or the books, please contact me! If you want to learn more about Fortune's Pawn, you can do that here!

Good Luck!
And please spread the word of the contest around. If I get a ton of people, I'll just give away more books to keep the chances even. Let's win some books! 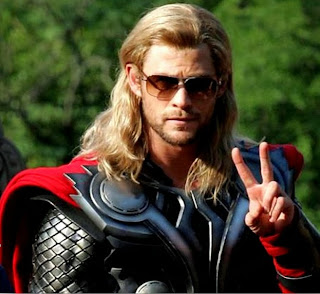 Twitter plug AND blog post have occurred! (I used your picture of the cover in my blog post, so if that's not ok, let me know and I'll remove it)

So excited that this is a worldwide contest!! :D
Rachel (another one!)

I tweeted about Fortune's Pawn, Pined the cover, and added to my Want To Read list on GoodReads (not sure if that one counts). Very excited about this book!

Congrats on your imminent release, Rachel!

here is one for tweeter and one for facebook

here is one for tweeter and one for facebook

RACHEEEEEEEEEEEL. Aah I'm so excited I WANT TO OWN EVERYTHING YOU EVER PUBLISH. Can't wait to read up on Devi and all her space shenanigans.

So excited about this!

Aaand Facebooked it, too!

Posted you to Pinterest! I'm so excited about this book.

I posted about your book on facebook! Here's the link!

As someone who lives outside of the US, let me start by saying WOOHOO \o/ Thank you for thinking of your international audience. Thanks Rachel.

I loved the Eli Monpress series and so did my dad and friend Carol. Looking forward to reading it.

You guys are aweeeesome! Picking the day 1 winner now!

Bumped it to the top of my 'to-read' list on Goodreads:
https://www.goodreads.com/review/list/2627394?shelf=to-read

and added it to my LibraryThing:
http://www.librarything.com/catalog/ebooksgirl

So excited to read it!

I posted on my face book.

Can't wait to read it!

Best of luck with your new series! Am sure it will do as well as the Eli series! :)

I just pre-ordered the kindle version, which frankly, even if I win a book, is what I am going to read. I tweeted my purchase: https://twitter.com/SCTechSorceress/status/390643598880174080, and you will find it in my Want to Read list on GoodReads

I happily wrote about Fortune's Pawn today for Stellar Four. I am so deeply excited for this new series!

Again, I'm just so excited. Congratulations on another series!

Posted on my FB. Brought this book up in conversation with 3 friends in the last couple days, had no idea this was going on (I fell behind on blog reading)! Hah. Pretty excited.

Dear Rachel,
for my scheduled Friday blog post, I plan to write about Fortune's Pawn, but I have a questions:

Am I allowed to use the Fortune's Pawn picture on my blog?

I'm so excited about your book!

Let me know if I can use the picture of the cover and I will add that to the blog post.

Another round of shares!

I brought it up on the Sword and Laser Goodreads Calender:

Though I'm not certain you can see it if your not in the group.

Gonna share this news on my https://anenglishessay.com site. Cheers!