2014 - The final Paradox novels and my new series!

Well, after a long and traumatic December, things have finally settled down here at the Aaron/Bach writing factory, which is great because 2014 is shaping up to be a huge year for new stuff!

First up, we've got the final two books of my SF series! After kicking things off with a bang in FORTUNE'S PAWN, Devi Morris's tour of destruction continues in HONOR'S KNIGHT (Feb 25, 2014) and HEAVEN'S QUEEN (April 22, 2014). I can't say how happy I am that Orbit's releasing these books so close together! I wrote the series to be one continuous story, and I absolutely can not wait for you guys to read the thrilling conclusion. Seriously, the final half of HEAVEN'S QUEEN is the most intense thing I've ever written. SO! EXCITED!

In other thrilling news, I'm pleased to announce that FORTUNE'S PAWN will be the Amazon Daily Deal on January 5 (this Sunday!). So if you haven't read the book yourself or if you have, and you know someone who you think would like it, this is your chance to pick up the FP ebook for only $1.99! That's a steal! I'll be making tons of announcements the day of, of course, but this is your official heads up!

But exciting as all of that is, it's not what I'm most excited about. That honor is saved for what comes next...MY NEW SERIES!! 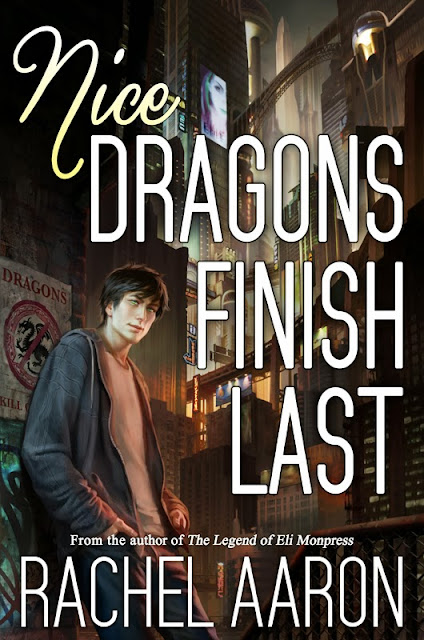 As the youngest dragon in the Heartstriker clan, Julius survives by a simple code: keep quiet, don’t cause trouble, and stay out of the way of bigger dragons. But this meek behavior doesn't cut it in a family of ambitious magical predators, and his mother, Bethesda the Heartstriker, has reached the end of her patience.

Now, trapped as a human and banished to the DFZ--a vertical metropolis built on the ruins of Old Detroit--Julius has one month to prove to his mother that he can be a proper, ruthless dragon or lose his true shape forever. But in a city of modern mages and vengeful spirits where dragons are considered monsters to be exterminated, he’s going to need some serious help to survive this test.

He only hopes that humans are more trustworthy than dragons...

Remember back when I was talking about writing a dragon book? Well, here it is: a new near future UF series about dragons and magic and general awesomeness coming in JULY 2014 from, well, me actually! I will be self publishing this new series this July.

"Hold up, Rachel," you might say. "Why the sudden jump to self publishing? Did your editor reject this book or something?"

Not at all! I actually specifically wrote this book for self publication. I decided to go this route for several reasons, many of which you've heard before (wanting more control over the publication process, better royalty rates, getting to pick my own cover, etc.), but the main reason I decided to self publish was a purely Rachel problem. See, I write fast. Like, really fast. And the cold hard truth is that New York simply cannot buy my books as quickly as I can write them.

Self publishing provided me with a ready solution to this conundrum, and I feel that this new series is the perfect candidate for this grand experiment. Nice Dragons Finish Last is very much like my Eli books in tone, but with a modern twist and an expansive new world. I've also invested a great deal of my own time and money into making sure these new books are edited and proofed to the standard of my NY published books.

Yours,
Rachel
Posted by Rachel Aaron at 9:34 AM

Ooh, Amazon deal of the day. Nice! If I can get online, I'll be sure to post about it. Love your Paradox books SO much! And I'm glad we don't have to wait long for the complete trilogy.

Good luck on your self-publishing venture! I am sure you'll do great!

I'm glad things are starting to settle down.

But to be honest I'm even more excited about this new series! I love the concept. I cannot wait to read it when it becomes available.

Also good luck on the self pubbing! I had wondered how NY dealt with your speed. Please share if you run into any interesting insights as you prepare for self-pubbing.

I'm really glad that stuff has settled down at home.

And I'm gladder-er that you've got a new series coming out near ny birthday! Got the gift to myself already lined up :)

Fortune's Pawn was the most exciting book I read in 2013. Can't wait to finish this series! SO glad I won't have to wait years. :) I love the sound of your new series! Will definitely be checking it out.

Awww, thank you guys!! I'm so excited about this new series I can't even express it. I'm especially excited that I'll finally be able to put books out faster, because I hate waiting as much as you guys do. I can't wait for you to read the new stuff!

Regarding "Nice Dragons Finish Last": OH. HECK. YESSSSSSSS. *weeps with excitement* Love the cover. Love the premise. Looking forward to this like I'm not sure you even know. When is July?!?!?!?!

Howdy...do you know if the hard copy of the book will also be a deal of the day on Amazon or is this only going to be for the ebook?

@Deshipley yay so glad you're excited! I know I am!!

Holy Cow Batman! what a blog post - so much exciting news in one go. I'm so thrilled I don't have to wait for ages between the rest of Devi's story; it finished with such a good cliff hanger, just enough to want the next book, but not too much that you want to strangle the writer ;)
The new book's cover looks fantastic, definitely worth the expense. Can't wait to it! Also looking forward to future posts on your personal take of the self-publishing journey.

Glad to hear that the whole Christmas hospital situation is over.

You do write fast - in fact, I have a problem keeping up reading ;)

Out of curiosity, what estores are going to be carrying this book?

Personally I'm partial to Kobo, but I'm not seeing this anywhere to pre order yet.