What! Rachel has a new novel? Since when?! 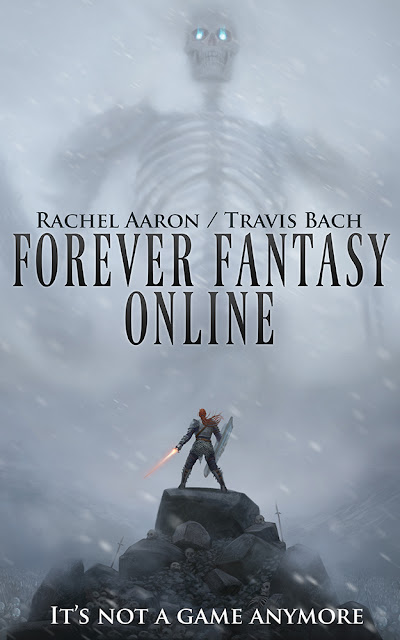 A thrilling new series for fans of Sword Art Online and World of Warcraft!

In the real world, twenty-one-year-old library sciences student Tina Anderson is invisible and under-appreciated, but in the VR-game Forever Fantasy Online she's Roxxy—the respected leader and main tank of a top-tier raiding guild. Her brother, James Anderson, has a similar problem. IRL he’s a college drop-out struggling under debt, but in FFO he's famous—an explorer known all over the world for doing every quest and collecting the rarest items.

Both Tina and James need the game more than they’re willing to admit, but their escape turns into a trap when FFO becomes real. Suddenly, wounds aren’t virtual, the stupid monsters have turned cunning, and death might be forever. Separated across a much larger and more deadly world, their skill at FFO is the only thing keeping them alive. But as the harshness of their new reality sets in, Tina and James soon realize that being the best in the game is no longer good enough.

Coming in ebook on June 1 and in audio in June 5, but you can preorder both RIGHT NOW!

If you follow my Twitter, you know I'm a giant anime fan and MMO nerd, so really, this novel was only a matter of time. But what you might not know is that my husband, Travis Bach, has been helping me with my novels since the very beginning. None of my books would exist without his help. Hell, he invented Julius! We've always been creative partners. Now, we've taken that process one step further and actually written the book together, and it is amazing.

Good collaborations are a special sort of alchemy. Done right, you can end up with something that's greater than either of you could have managed alone, and that's what I think we've got here. I've never been more excited about a project. This book is our love letter to the online games we've played obsessively for over a decade. We wanted to show the strength, ingenuity, drama, and occasional hilarity of the MMO culture without painting over its flaws. If you're a gamer, if you liked Devi, if you liked Julius, you are going to love this book.

Forever Fantasy Online is the first in a trilogy. The second book is already written and being edited right now, so you won't have to wait long for more (and trust me, you're going to want more!). For my audio fans, you're in luck! The audio book comes out on June 5th from Audible.com and is available for preorder as well!

Better still, for the first time ever, the book will be available on all platforms! That's right, no more Amazon exclusivity. You asked, and we're finally delivering. The links are still propagating, but by its launch date, FFO will be available on all the major ebook retailers, including Amazon, Barnes & Noble, Kobo, Apple iBookstore, Waterstones, and in public libraries via Overdrive!

We'll have the full list on rachelaaron.net as links become available, but you should be able to get the book pretty much anywhere, and that's always a good thing!

Can you tell I'm super excited about this project? Because I am SUPER EXCITED. Travis and I have been working on this book for over a year now, and I can not wait for you to read it! If you've liked my other novels, I really hope you'll give it a try. It's a bit different, but I feel in a good way. That will be up to you to decide, though. You are all the reason that I (and now Travis as well) write, and we both hope you love this new series as much as we do.

Thank you as always for reading, and we hope you enjoy Forever Fantasy Online!

FOREVER FANTASY ONLINE is the first book in the FFO trilogy. If you're new, to my work, I recommend you start with NICE DRAGONS FINISH LAST. I promise you won't be sorry!
Posted by Rachel Aaron at 10:01 AM

Question: is this the big Secret Project you keep not telling us about?

--Or can you "neither confirm nor deny" whether there's still a secret in the works? :)

@aleta we are using Smashwords for all non-Amazon distribution. They push the book to OverDrive, Baker & Taylor, Axis 360, Tolino, Gardners (Askews & Holts and Browns Books for Students), Bibliotheca, CloudLibrary, and Odilo.

So it's not everyone but it is the biggest list we can get into. Indie published books can't access every library ebook service on their own just yet.

As concerns libraries i mean.

@Ken Huges yep! This is the big project! Over a year in the making o_o But SOOOOOO worth it!!

And we're definitely trying to expand our reach, especially as concerns libraries. It's still really hard for indies to get into stuff like that, but I discovered so many books in libraries when I was younger. I want to keep that going! Also, I just really love libraries :D

To get in a library, it may help to have an ISBN, Library of Congress CIP number from http://www.loc.gov/publish/pcn/ and/or a PCIP from http://www.cassidycat.com/pcip. And there's Ingram and their library-friendly distribution system.

--Assuming Travis hasn't researched all of those long ago, of course. :)

This news is shocking! And amazing!

So... will The Heartstrikers be making an appearance in the wide market? My Kobo would sure appreciate it!

How exciting! I love these kinds of stories, but most of the books suck so far. Since I know you can write, I have pre-ordered the audiobook.

LitRPG for the win! It's a very popular subgenre right now

@Ken we've a real ISBN for FFO (unlike previous books which only had the Amazon version). We'll be trying out IngramSpark for print distribution as well which should make the book far more accessible to libraries and to bookstores.

We're really trying to up our game in terms of the books' distribution and accessibility. It's a big world outside of Amazon.