Well, it's finally here! 2 years after the first books hit the shelves, Eli's story is finally coming to an end. Specifically, SPIRIT'S END! 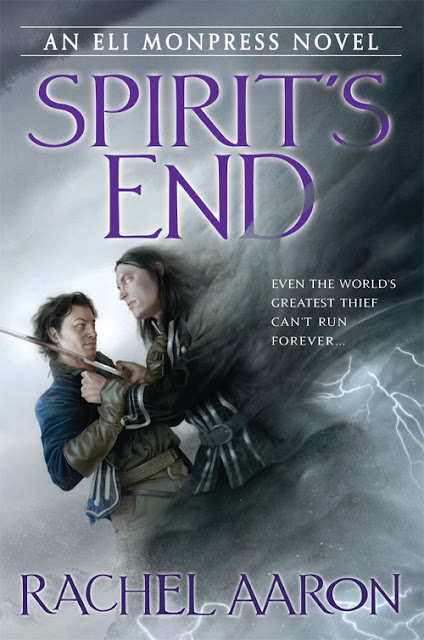 Yes, the End of Eli is finally here, and what an ending! Just look at all that lightning! Well, there's a lot of lightning to be had in this final installment, and even though most book stores (and Amazon) are already selling/shipping the book (you can read Fantasy Book Critic's rave review here), I'm giving away seven signed copies, one for each day until the official release on November 20! (I mean, what else am I going to do with this awesome box of books Orbit sent me?!) 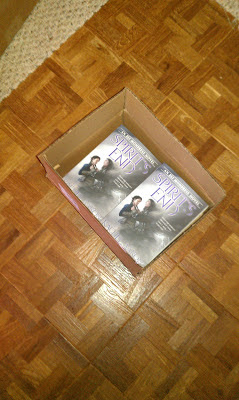 (THEY DEMAND TO BE GIVEN AWAY!)

BUT WAIT! THERE'S  MORE! In addition to the 7 signed copies of Spirit's End, I'm also giving away a grand prize of all three of my books, signed to the lucky winner, plus a $50 Amazon.com gift card! 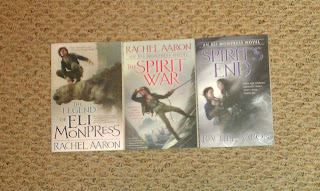 THE GRAND PRIZE!
(Not pictured: Amazon.com gift card, my overflowing gratitude that you people read my books!)

So if you're ready to win free books, get ready to spread the word about Eli! Official rules are below. For those of you who've done my contest before, it's the same as always. And since this is Eli's final hurrah, this contest is open WORLD WIDE!

The Prizes!
You've waited patiently for so long, and now your patience shall be rewarded! I'm giving away 7 personalized signed copies of SPIRIT'S END, one for each day from today to Monday, November 19th! And then, on Tuesday, November 20th, I will be drawing one grand prize winner who will receive signed copies of ALL THREE Eli Monpress editions (that's the first three books in the THE LEGEND OF ELI MONPRESS omnibus, THE SPIRIT WAR, and SPIRIT'S END, all signed to YOU!) plus a $50 Amazon.com gift card to spend on the books of your choice!

How to Enter
To enter to win these amazing prizes, all you have to do is spread the word that SPIRIT'S END is coming out on November 20th! Post about Eli on Facebook, Twitter, Pinterest, Tumblr, your blog, or any other social platform of your choice and then drop me a note in the comments below letting me know what you did and I'll enter you into the pot.

This is a raffle, that means you can enter multiple times. Every time you spread the word somewhere on the internet (or even in real life! I'll totally count putting up a flyer if you roll old school!) put it in the comments below with a link. Pin the cover, post on Twitter, and mention the book on your blog? That's 3 entries! Tell me so and I'll enter your name 3 times.

I'll be drawing from the comments on this post every day, including today, so the sooner you enter, the more chances you have to win! You can also keep promoting the book every day to increase your chances ever further. Winners will be announced the morning of the day after they win, so today's winner will be announced tomorrow morning, etc.

The grand prize drawing will be on TUESDAY, NOVEMBER 20th at 5:00 PM, east coast US time (EST). After that entries will be closed and I'll be mailing out a lot of books!

Boring Rules Stuff
Since this is the last Eli book, I'm pulling out all the stops! This raffle is open WORLD WIDE! Only one entry per social network per day (so no posting it a million times on Twitter for a million entries :P). Readers who win one of the earlier signed copies are still eligible for the grand prize at the end, but since they already have a book coming to them, I'll pick a new winner to get the extra copy.

If you have any questions about the contest, the rules, or the books, please contact me! If you want to read a sample of SPIRIT'S END, you can do that here.

Good Luck!
And please spread the word of the contest around. If I get a ton of people, I'll just give away more books to keep the chances even. Thanks for playing!

YAY ELI!!! I have already pinned the photo to my "Books Worth Reading" board on Pinterest (I follow you as Kate Sape), shared your status on my Facebook (same name) and let people know on my reading blog: http://thelitcrit.blogspot.com/2012/11/win-books.html *crosses fingers*

You have been properly pimped on Facebook. Also CAN'T WAIT :D

Oh, and I also shared this with on my Facebook page! :)

I can't wait to read what happens next to Eli

I must spam all of the social medias!!

Pimped your stuff on my FB account here: http://www.facebook.com/brittany.viens.3

and over on tumblr: http://www.tumblr.com/dashboard

I posted on my blog about SPIRIT'S END on my blog at http://www.eric-christensen.com/2012/11/13/the-eli-monpress-series-is-coming-to-an-end/.

I have shared this on my facebook, and my page. :D

I'm super excited for this book to come out- I've been dying for it since I read Spirit War! I posted about it on my Facebook (www.facebook.com/marci.stevenson/) and I know I'll be posting elsewhere. Even if I don't win a signed copy, I think the book is totally worth promoting!

I tweeted about Eli and being excited to read Spirit's End. :)

Tweeted about it! Woot woot!

Howdy,
I have two facebook pages and it is posted on both!
Can't wait.

I can't wait for the 20th, I'll Kindle it RIGHT AWAY so I can start reading it!

Posted it here! :D I've been counting the hours until this book comes out, can't wait!

*casually spamming this post because I would really enjoy a free signed book :'D*

Facebook too, yes....frankly, I'm not sure how to get the status in a stand-alone window so here, have my profile. :'D

Well, adding to my publicity-izing (I don't like the word publicizing- so sue me) by posting on Twitter (@greysprincess) and tumblr (http://outofgreysmind.tumblr.com/post/35676418480/spirits-end-comes-out-november-20) today. Hopefully tomorrow I'll have time to post on my blog and youtube channel!

Shared on Facebook! I'll definitely post it to other places when it's not 4 in the morning. XD

Well, that's a genereous offer! Thanks a lot!
I've talked about Spirit's End on my twitter (@LyraSullyvan) and on my review of the 1st book (that I just closed and really liked) on my French blog (link on my twitter too).
Congrats for the release of your book and lots of good reader for it!

I retweeted your link on twitter a couple of times. :)

Day One's winner is up! Congratulations to B.A. Viens! Instructions on prize collection and the all important celebratory GIF can be found on the Day 1 Winner post (http://thisblogisaploy.blogspot.com/2012/11/day-1-winner.html)

Again, congrats and thank you everyone for participating! Remember: we've still got 6 books and the grand prize left to go, so keep spreading the word!

Posted on Facebook and twitter. ^_^ And I wrote up a blog piece entitled The End is Nigh.

I contrasted the end of your series with the upcoming end of the Mayan calendar. That was a fun write. :D

Couldn't resist posting about it on my blog today! :-)

Posted again on Facebook (Kate Sape) and reminded people about it on my blog (www.thelitcrit.blogspot.com).

Yeah! 2 more entries for me!

I picked up the first three books at a used book store and read them in a week!! I cannot wait for the last book!!

Tweeted and posted an announcement about the release on Facebook and Google+ this morning (11/15).

I mentioned Spirit's End on my facebook, tweeted about it, and mentioned it on my blog.

Okay. Posting on TWO facebook pages again (both Cindy Clements) today to be added in again.

Posted a link and cover pic of Spirit's End on my Facebook!

Posted on my blog!

Oh, this is so exciting! Posted on FB and pinterest. Have an awesome day!!

Posted on Facebook and Pintrest again!I also mentioned it on my fanfiction and deviantart accounts.

Posted today (Day 3 I think) again on both facebook pages (both cindy clements)....hoping to win....

Oh how exciting! I'm a brand new reader and I was just telling my friends how awesome you are for supporting us NaNo writers. Here's my post on FB: https://www.facebook.com/rosemary.norwood/posts/364307350326390

Okay, entering in for Day 5....my usual TWO facebook posts (under Cindy Clements)...

Day 5 is sure to be my lucky day! Posted on facebook - Karen Howl

I shared on my facebook, as well as tweeted it.

I posted it on Facebook. Totally legit book series.

Posted 2 times again on facebook for both of my accounts..(both Cindy Clements)....here's to tomorrow : )

This is a great series. Thank you for writing it.

I'm rather sad that this is the end of Eli Monpress.

Mentioned you on Goodreads.com

Posted again on my blog/facebook. So I should have 9 entries total! :D