The book I've been teasing for a year is finally done. For the first time ever, I have written two series in the same world!!

If you're familiar with my other books, you'll know this is a big thing for me. I generally never go back to a world once a series is over. But even though Julius's story is done, there was so much more I wanted to do with the world of the DFZ. Enter MINIMUM WAGE MAGIC! 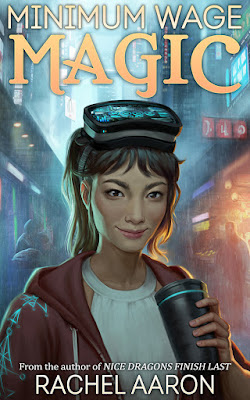 Making a living is hard. In a lawless city where gods are real, dragons are traffic hazards, and buildings move around on their own, it can feel downright impossible.

Good thing freelance mage Opal Yong-ae has never let little things like impossibility stop her. She’s found a way to put her overpriced magical art history degree to use as a Cleaner: a contract municipal employee who empties out abandoned apartments and resells the unusual treasures she finds inside for a profit. It’s not a pretty job, or a safe one--there’s a reason she wears bite-proof gloves--but when you’re neck-deep in debt to a very magical, very nasty individual, you can’t be picky about where the money comes from.

But even Opal’s low standards are put to the test when the only thing of value in her latest apartment is the body of the previous tenant. Dealing with the dead isn’t technically part of her job, but this mage died hiding a secret that could be worth a lot of money, and Opal’s the only one who knows. With debts she can’t pay due at the end of the week, this could be the big break she’s been waiting for, but in a city of runaway magic where getting in over your head generally means losing it, the cost of chasing this opportunity might be more than Opal can survive.

Help me, internet! I'm having a horrible time picking the title for my new book. Knowing nothing else other than it's urban fantasy, which title sounds the coolest?
— Rachel Aaron/Bach (@Rachel_Aaron) October 16, 2018


Well, it was this one, and I think the results speak for themselves. Thank you all so much for your input! I would have really screwed this up if not for y'all!

MINIMUM WAGE MAGIC is the first book in a new, stand alone series set in the DFZ twenty years after the events of LAST DRAGON STANDING. It's an all story with an all new cast, plus some cameos from characters we already know and love ;).

But while we are back in the world of the DFZ, you don't have to have read any of the Heartstriker books to read this one. There's no spoilers, no required knowledge. We're just having fun in a ridiculously dangerous and bizarre magical city with new mages, new magical critters, new problems, and--of course--new dragons!

If you liked my Heartstrikers books, you're going to love MINIMUM WAGE MAGIC! It's up for preorder now with an official release date of November 9. There will also be an audio book coming soon, but Audible hasn't told me who's narrating it yet. I'll let you know as soon as I find out!

Thank you as always for being my readers! You guys make all of this possible.

If you live in America (or anywhere that pays attention to American politics), you know the news cycle has been SUPER stressful and upsetting lately. I know I've been pissed off every minute of every day, so I thought why not inject some more positivity into the world? We need some nice dragons, dammit! So here you go: 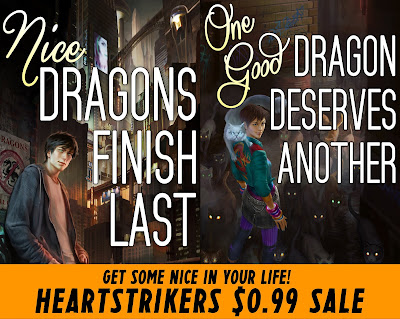 This week only, both NICE DRAGONS FINISH LAST and ONE GOOD DRAGON DESERVES ANOTHER are on sale for $0.99 each!

That's right, for $2 you can give yourself (or foist on a friend) the gift of dragons! I think we all need a place where decency wins and bad guys get eaten right now, so if you've been waiting for an excuse to try my Heartstrikers series, this is it! Come give Julius a shot, I promise you won't be disappointed!