Sorry I've been away so long! I'm finishing up a book and that always makes me more hobbit-like than usual (why yes, I DO live in a hole in the ground! It's cozy, and there's tea.) But, since some people have been asking, I'm popping up to do a post with the official rules of Daggerback! 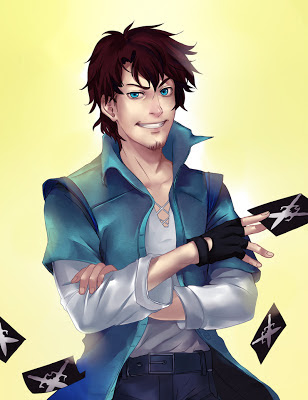 For those of you scratching your heads, Daggerback is the gambling card game Eli likes to kick Josef's butt at. This isn't Josef's fault since the skills required to be good at Daggerback are a head for percentages and the ability to bluff, both of which are areas where Eli has him beat. (Really, Josef should probably just stop playing, but he's too competitive to ever say no.)

A Daggerback deck consists of the following:

4 Kings, worth 2 points
4 Queens, worth 3 points
6 Wizards, worth 4 points
8 Knights, worth 5 points
and, of course, the three trump cards, the Hunter, the Weaver, and the Shepherdess, which are worth 1 point each.

Just like in Hearts or Gin Rummy (my favorite card game), lowest hand wins in Daggerback. Hands are played thusly:

At the beginning, everyone puts their beginning ante into the pot in the center. Once everyone's put in their money, the dealer deals everyone two cards, one face up, two face down. Once everyone has their cards, the play begins in earnest.

Since everyone has one card visible and one card hidden, players try to bluff each other on their hidden card. For example, in The Spirit Thief, Eli knew Josef's hand couldn't be any good because he was showing a knight, the worst card. But, Eli being Eli, he wheedled Josef into bidding higher than he should have. This bidding stage is also where players who know they have low hands can choose to fold and forfeit their initial bid.

This first round of bidding only goes around once. Once everyone has thrown in, the dealer deals the final cards and the final round of bidding begins. Unlike the first bids, which were capped at one per player, this second round of bidding continues until all players are done. It can go on for a while, especially if you end up with two players who both think they have winning hands.

Players must keep bidding to stay in the game, either matching or raising the bid before theirs. If they can't, they fold and forfeit everything they've put in. If none of the players can match a bid or if all players agree that enough's enough, the bidding ends and everyone shows their cards. The hand with the lowest total points is the winner and gets the pot.

So, as you see, not a complicated game. The hands are fast and the rules are simple, making it a favorite among the caravaners and bar room types, especially since all the cards use pictures meaning  you don't have to be able to read to play (a big concern back before the Council of Thrones improved literacy rates).Naturally, no one of any money or breeding would be caught dead playing Daggerback, which is part of why Eli loves it so much. That, and it's a bluffing game. It was practically made for him! (The fact that the deck is small enough to fit in his pocket doesn't hurt either, Eli has a highly mobile lifestyle).

And that's Daggerback! Of course, I'm an author, not a game maker. I created Daggerback as a way of slipping the three Powers in early and to show the Eli group's dynamic. With this in mind, I can't vouch for Daggerback being a good game, but if you want to fleece a Josef of your own, now you know how.

For the record, it is totally possible to create your own Daggerback deck out of two decks of playing cards, so if you give the game a try, let me know! Also, if of you are game theory fans who can think of a way to make the game more interesting without changing the cannon rules that appear in the novels, please let me know.

Final note: a huge shout out is due to StellarFour who did an amazing review of Spirit's End! I am blushing, I am! Thank you everyone who helped launch Spirit's End with a bang!
Posted by Rachel Aaron at 1:27 PM

Email ThisBlogThis!Share to TwitterShare to FacebookShare to Pinterest
Labels: Fun

We are definitely giving it a try, having been trying to play it and figure it out since the first book!

I played this with some of my friends :) Won 15 bucks...awesome game XD

-strokes imaginary beard- Sounds like a good time!
I must try this!

Hope you enjoy it! (And that it's actually, you know, playable!)

To-do list: Make hand-drawn Daggerback cards with Eli Monpress characters on them for personal use...

Hi Foti, thanks for following me for so long, I do appreciate it.
If you post a comment here with your email address, I'll shoot you the book.
I won't publish the comment
Kızlık zarı

I found an awesome company a while back that will make custom decks -- like with my kids' pictures on them. It would probably be super simple to have these made -- and how fun would that be to have an *official* Daggerback deck :)

Hi I was searching for the blogs for many times, now I have reached at the right place.http://nongambler.com/gambling-intervention

Nice to read this article will be very helpful in the future, share more info with us. Good job!full coverage insurance

This is really quite informative blog such qualitative info I have never seen anywhere. pay loan

This is really quite informative blog such qualitative info I have never seen anywhere.new york city loans

I advise you to read this information if you are going to pick your college soon. This is quite important info about application fee