Sexism and the Female SciFi Author

So there's been noise around the internet about this article by Tor UK editor Julie Crisp. The basic gist of the post is that the low number of SciFi books by women on the shelves isn't because publishers are locking the door on women, it's because they just don't get a lot of SciFi submissions by women, and they can't publish what they don't receive.

Now, there have been some thoughtful posts decrying this as buck passing: "Oh, it's not our fault the vast majority of genre books coming out are written by dudes. Lady authors just aren't writing the stuff. Step it up and solve sexism, women!" And while I don't entirely agree that's what's going on here, (okay, that's exactly what's going on here, but I don't think it's being done mean spiritedly), the truth is that sexism everywhere, but specifically sexism in genre fiction, is far far FAR more insidious and deeply rooted than this sort of "the numbers don't lie, boss" reductionism would imply, especially when it comes to Science Fiction...

...Annnnnnd since, (SHAMELESS PLUG) I have a SciFi novel coming out in November that is not only written by a woman, but has a female main character (DOUBLE RAINBOW!), I thought I'd take a moment to explore why many women aren't drawn to space in books.

The lack of women in SciFi fiction is really strange and striking when you consider the overwhelming female fanbase for SciFi in other media franchises. Star Wars, Battlestar Galactica, Babylon 5, and (everyone's favorite) Firefly all boast impressive female viewership and fandom (and fanfic writing). Clearly, women are capable of understanding and enjoying the hell out of space stories, so why aren't more women writing/publishing Science Fiction novels?

Well, first off, women ARE writing Science Fiction. I actually grew up reading SciFi written by Anne McCaffrey and Ursula Le Guin. I also read Dune and a metric ton of David Brin, and of course all the Hitchhiker's books. Today, I read Anne Aguire and Elizabeth Moon and Elizabeth Bear. But while there are lots of women telling successful Science Fiction stories, the undeniable truth is that they are the vast minority of the Science Fiction out there.

I think a big part of the blame for this discrepancy can be placed squarely on the shoulders of Science Fiction's rep as a "man's game." For example, all those female authored SciFi books in the last paragraph that I grew up with? They were from my mom's shelf. I read them in the classic tradition of teenage reading: because they were what I had. And I loved them, don't get me wrong, but when I grew up and started buying my own books, I went almost exclusively into Fantasy (UF and Epic) and all but ignored Science Fiction. Looking back, I did this because subconsciously I knew that SciFi was "for guys," and even though a specific book might look interesting, it would probably just be a bunch of dudes doing manly, dude stuff with no female characters of note. So I didn't buy.

Was this dismissive of me? Sure. Did I miss a bunch of awesome books because of my own preconceptions? Almost certainly. But I got those preconceptions--that space stories aren't for me, that I wouldn't understand, that I'm not welcome in this genre--from Science Fiction itself. From the way it is marketed and discussed, from the covers, from the truly sexist SciFi dudes who make it their mission in life to keep girls and their girl cooties away from their hallowed spaceship tomes. True, no one ever stood in front of a bookshelf and told me I couldn't buy Science Fiction, but there was definitely push back, and as a woman in a book market where I had so many choices about how to spend my reading time, I simply didn't see the point of putting in the effort to read a genre where they didn't want me around in the first place.

This is the cycle that has ultimately created such an enormous gender disparity in Science Fiction readership and authorship. Stories are written by men and then marketed to men, who read them and become inspired and write their own male-centric stories that get published and then marked again to men, and the whole thing starts over. In general, it's not a mean or vicious "No Girls Allowed" sort of thing (though that does happen). It's just the rut, and ruts are very easy. Sexism, in general, is easy. It's a lazy way of thinking that replaces complicated actual experience (ie: women are people and thus come in every personality imaginable and are often self contradictory) with a label (Women, yeesh! Amirite, guys?!) which is why it's so so so hard to combat.

The trouble is, this sexist rut is hurting everyone. Even as popular culture at large becomes nerdier and nerdier with big SciFi movies like Star Trek and Pacific Rim coming out as the huge summer blockbusters, Science Fiction as a written genre continues to be small and stagnate. It's not for lack of quality, amazing books are coming out, but so long as SciFi continues to allow itself to be perceived as old, sexist, white guy reading, that will be its audience.

It's almost laughable that a genre built on big new ideas and pushing boundaries has let itself be pigeonholed into such a small box. But if it wants to break out, then everyone involved in the genre--marketing, publishers, writers, and fans--needs to work together to break down the harmful stereotype that Science Fiction is a boys club. How you ask? Any number of ways! How about covers that feature female characters doing badass things? How about marketing Science Fiction book that also feature strong romantic plots to Romance readers? How about writing more interesting and rounded female characters into your stories? How about making sure Science Fiction conventions are places where women can feel safe rather than excluded and/or preyed upon? How about having a main cast that is something other than overwhelmingly white and male?

There are any number of ways to open up the Science Fiction genre to a wider audience, and we should be scrambling to do them. These stories deserve a wider readership, and, in turn, a wider authorship. Because writers tend to write what they read, and until the SciFi readership is balanced between men and women (and people of color) we're never going to see a true parity of male/female authorship in the genre or a wider range of non-white authors, and that's just sad for everyone, especially people who want to keep reading new and amazing SciFi stories.

To be clear, I'm not hating on or attacking Science Fiction itself. Hell, I wrote three freaking books about a powered armor user who shoots aliens and flies through known space on a trade freighter. I love me some Science Fiction, and I want to write a lot more of it, which is why I'm writing this post. Because Science Fiction as a whole is never going to escape the low sales numbers corner it's painted itself into by catering only to white men until it starts reaching out and welcoming a wider readership.

So let's stop digging in our heels and passing the buck on sexism and start working to change things. Because this genre deserves more than this. We deserve more, and we can have it if only we have the will to reach.
Posted by Rachel Aaron at 10:15 AM 16 comments:

At last! My new cover!

After many setbacks, I can finally reveal the cover of Fortune's Pawn to you in all its spacey, helmeted glory! 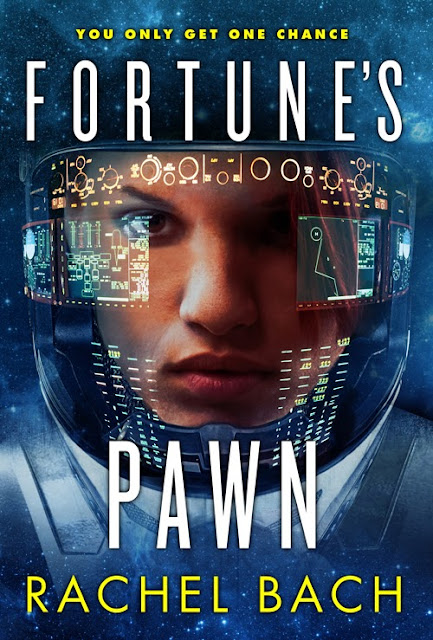 That is, until she just gets a job on a tiny trade ship with a nasty reputation for surprises. The Glorious Fool isn't misnamed: it likes to get into trouble, so much so that one year of security work under its captain is equal to five years everywhere else. With odds like that, Devi knows she's found the perfect way to get the jump on the next part of her Plan. But the Fool doesn't give up its secrets without a fight, and one year on this ship might be more than even Devi can handle.

So as you see, my name is Rachel Bach for this one. This is because the Paradox Series is 1) science fiction rather than fantasy, and 2) much more R-rated than my Eli books (cursing and KISSING O_O). The main character is Devi Morris, a powered armor mercenary with more ambition than is probably healthy and a critically underdeveloped fear of danger. The book is fun and fast and a bit scary, full of shoot em' ups and big mysteries. There's also a romance that is probably my favorite thing ever in the world!

There are 3 Devi books total--Fortune's Pawn, Honor's Knight, Heaven's Queen--that work together to complete a single arc both meta plot-wise and romantically. All three are already in my publisher's hands, and I can not WAIT for ya'll to read them!

So, if you liked my Eli books, love powerful, flawed, take-charge female main characters, and think that your own suit of powered armor sounds pretty damn nifty, I invite you to check out Fortune's Pawn when it hits shelves later this year! I'll be doing all sorts of give aways and so on closer to the release date, and I'll be putting up sample chapters soon as well. In the meanwhile, thanks for reading and I promise I'll get some more real blog content up soon.