So my attention over the last few hours has been drawn to Stop the GR Bullies. For those of you who've managed to dodge this internet oddity, GR stands for GoodReads, which apparently has bullies or something.

Now, when I first heard of this site, I thought it was an author blog complaining about reviewers, which lead to RAGE, but then I read a little deeper, and I discovered I was wrong. Stop the GR Bullies appears to be a site cataloging the wrongs of certain GoodReads posters who team up to "take down" badly behaving authors through scathing forum posts. Stop the GR Bullies aims to stop these "bullies" by, wait for it, engaging in similar types of personal attacks under the flag of righteous defense, complete with twitter stalking of the proclaimed "bullies," personal attacks, real life pictures, and other general creepiness.

Annnnnnnnd this is about where my palm hit my face.

Okay, people, I realize it's 2012, and a decade and a half might not have been enough time for you to properly realize the truth of the internet. For sake of clarity, allow me to employ a (crude) visual aid from the ever helpful Penny Arcade: 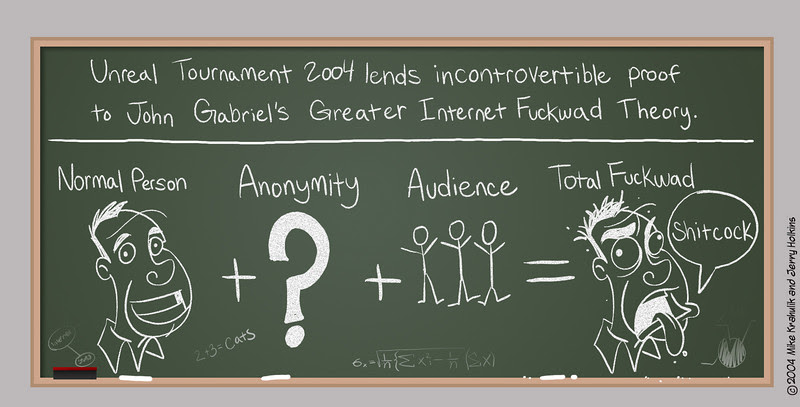 People on the internet are jerks. Not all people, but enough that you're sure to find them anywhere opinions can be expressed. Jerks say terrible things without regard for the feelings of others, often for attention. Arguing with these people, pleading with them, or attempting to shame them into better behavior is fruitless because the same wall of distance combined with the megaphone of the internet that gave them the power to make you so mad in the first place protects them from any real retaliation. It's all one giant shouting match, and anyone who's watched a political debate can tell you just how effective those are at changing people's minds.

Honestly, I have a lot of sympathy for victims of internet trolling. It can make you feel powerless and desperate, which is not a fun way to be. But, for the love of little green apples, surely, surely you can see the irony of "fighting online bullying" by becoming bullies yourself.  I mean, that's some Nietzsche "Battle not with monsters, lest ye become a monster" shit right there.

GoodReads is an internet community frequented by thousands of vistors every day. 99% of those are perfectly lovely people who rate books, leave reviews, and generally use the site as intended. The remaining 1% are the crazies. You can't stop people from being jerks. It's the part of human condition. But you can stop feeding the trolls, and you can refrain from becoming a troll yourself.

Haters gonna hate, y'all. But unlike in Elementary school, these bullies can't actually shove you in a locker. So just let them be, don't give them attention, and they'll go away. Even if they don't, it doesn't matter. The only real defeat comes when you let them win. Never do that, and you can never lose.

It's just the internet, guys. Go have a coffee and cool off. And lay off the twitter stalking, that's creepy.

This has been a friendly message from you nosy neighborhood author,
Rachel
Posted by Rachel Aaron at 8:58 AM

I love this! I can't tell you the number and variety of sites I've been on where I've witnessed this myself. Sometimes people just need to get a grip and move on.

This just needs to be posted all over the internets. In fact...when I see people getting butthurt about things on the internets, I may just link them

You know another place to find some seriously creepy bullies?

I read a great article also about this yesterday where the author pointed out that calling this bullying is a real disservice to people who are actually senselessly bullied.

But to say they're being bullied when there are children being driven to suicide based on Internet bullying is kind of disgusting.

Thanks for the awesome comments!

I really can't get over these people. I'd think this site was a parody if they weren't so obviously serious.

And @Ruth, you're absolutely right. Writing is a form of entertainment. As I'm sure they said in Vaudeville, if you can't take the tomatoes, get off the stage.

"Full of sound and fury, signifying nothing."

It could be said of a remarkable amount of the stuff people say at one another on the internet and you know what folks always forget?

Also, Rachel, on a completely unrelated note, some internet peepages and I were having a discussion about opening lines the other day in reaction to something on i09 about first lines. Anyway, someone mentioned how awesome the line about Eli in the prison with the door was.

Yeah, I murdered that sentence, you get the idea, though, right?

Very well said. I don't personally feel that the people outed on "Stop the GR Bullies" are Internet jerks (and realize you've not stated a position either), but even if every single thing said on the site were true, it would be wrong, wrong, wrong.

Gotta agree with all of that, except "Go have a coffee and cool off" ..that just fires the energies and gives the bad thoughts time to regroup!

So I'm a regular GoodReads user. I often look up book reviews to decide what to read next, and I've left a few reviews myself...some good, some not so good.

On the whole Authors Behaving Badly thing: When I see that an author has "behaved badly" to a well-thought out review, then I immediately don't want to read their book. There's so many good books out there, and good people, it's just a turn off. I'm also likely to hit the "like" button on whichever review the author was behaving badly towards (IF the review was obviously well thought out and IF the author went completely overboard with their bad response to it). It's just my nature I guess.

Now, are their trolls out there trying to drum up hatred against the bully authors? Sounds totally plausible to me. I don't think it's right (if it's stalking and posting fake bad reviews and other stuff). Seriously. That is so uncalled for. A previous commenter said that we need to be concerned with real bullying, the kind that drives people to suicide. Well what you describe in your post - of people stalking these authors, hounding them, posting excessive fake bad reviews, basically trying to ruin their writing lives completely etc -- is *just that kind of bullying*.

Acting badly towards a review is not the kind of bullying that leads to suicide -- and yes, an author should be FAR more professional than that -- , but ganging up on the badly behaving author and trying to squelch out their online existence IS. It is so so so SO much worse.

So I hope people take your post seriously. I'll be sure to react differently to the bad reviews heaped upon "authors behaving badly" and be sure to pipe up in their defense if it seems to GR Goons or whatever have started a bullying campaign against them.

This post is garbage. Go read STGRB and you will see what is really going on. Go read it and educate yourself before regurgitating lies and staying ignorant on the subject. The GR bullies won't just "go away" if you ignore them. If that is what you think, then you really don't know what you're talking about.

I'm confused as to who exactly you're suggesting stfu? My understanding is that the STGRB site is trying to destroy authors of reviews they consider to be "too mean." Their logic appears to be that writing a negative review is bullying and all negative reviews on the internet need to go die in a ditch. Or something.

I really hope you're not suggesting that everyone who writes a negative review just trolling for attention. I didn't think that was your point at first but by the end of your post, it's unclear which side you're attempting to call out as "internet jerks."

It will be useful for college students to check this out. Here you can learn more about Free Phone Number Lookup

Best way to spy on some text messages

Check out this Phone tracking app

Spying is not necessarily means you are trying to shatter someone’s peace and quiet. Considering today’s tendencies it’s obvious that parents worry about their children. Here is the solution. Go Hire a cell phone hacker to find more!