"You’re doing what?" – Why I Decided to Self-Publish My Next Series

So I wrote a guest blog post for the always amazing Civilian Reader about why I decided to hitch my star to the indie author steamroller.

This is the most I've ever talked about my decision to go self-pub (there's an unwritten rule in publishing that you don't discuss business decisions in public, which is one of the big reasons the industry seems so mysterious). I admit, there's very little drama, which is kind of the point of the post actually. Still, I hope you'll find it interesting!

And on that note, my new novel Nice Dragons Finish Last, come out in less than ten days!! 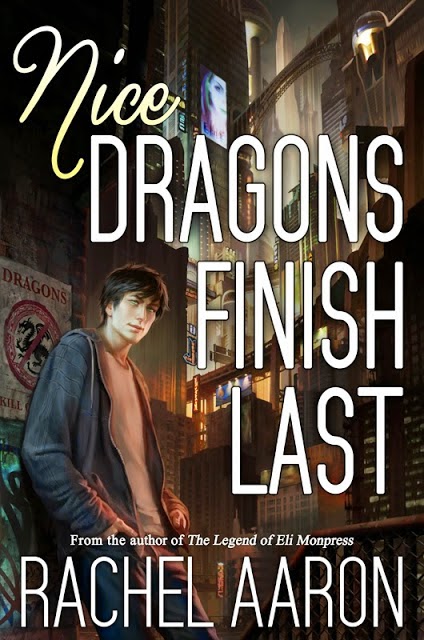 As the smallest dragon in the Heartstriker clan, Julius survives by a simple code: stay quiet, don’t cause trouble, and keep out of the way of bigger dragons. But this meek behavior doesn't cut it in a family of ambitious predators, and his mother, Bethesda the Heartstriker, has finally reached the end of her patience.

Now, sealed in human form and banished to the DFZ--a vertical metropolis built on the ruins of Old Detroit--Julius has one month to prove to his mother that he can be a ruthless dragon or lose his true shape forever. But in a city of modern mages and vengeful spirits where dragons are seen as monsters to be exterminated, he’s going to need some serious help to survive this test.

He only hopes humans are more trustworthy than dragons.
You can read the first three chapters here to get a taste of what's coming July 15! Thank you everyone for reading, and I hope you enjoy my guest post.

Yours,
Rachel
Posted by Rachel Aaron at 8:37 AM

Email ThisBlogThis!Share to TwitterShare to FacebookShare to Pinterest
Labels: Business

Where can I buy this book? I can't find it on Amazon or Barnes and Noble. I'm a huge fan of yours and really want this!

Nice Dragons comes out July 15! I can't offer pre-orders since I'm self publishing this series, but on July 15 the ebook should appear on Amazon, Barnes & Nobel, Kobo, and hopefully Apple iBookstore. We'll be doing a print version shortly after (print takes longer to put together!)

Thank you so so so much for reading and I hope you'll pick up Nice Dragons when it comes out :D

I'm so excited for you - I'm off to read the guest article now!

Excellent Blog! I would like to thank for the efforts you have made in writing this post. I am hoping the same best work from you in the future as well.
I wanted to thank you for this websites! Thanks for sharing. Great websites!
pubg mobile apk
pubg lite
pubg apk
pubg mobile lite
pubg

If there’s one online income source I like talking about most, it’s definitely self-publishing on Amazon. I’m normally a pretty modest guy but I’ve gotta say… I rock at self-publishing!

I’ve increased my monthly income from nothing to nearly $2K in less than three years just from selling books on Amazon… and I was making a grand a month within a year.

The post on how I make money self-publishing has been one of the most popular on my personal blog so I wanted to update it with everything I’ve learned over the last few years. I’ve included updates on how to turn your books into a passive source of income and how to make the whole process easier.

Ok, so $2K a month isn’t huge money but it’s getting there and it’s growing very quickly.

If you want to learn more about making money with Kindle then check out “KindleBucks.com” which is the #1 Amazon Kindle Training out there.

I can't recommend it enough. That's how I got started almost three years ago.

Excellent Blog! I would like to thank for the efforts you have made in writing this post. I am hoping the same best work from you in the future as well.
I wanted to thank you for this websites! Thanks for sharing. Great websites!
APK Apps for fire stick
whatsapp war apk
whatsapp yo apk
whatsapp faud apk
whatsapp latest gb apk

namebiography.com
Thank you for this post. Keep it up..